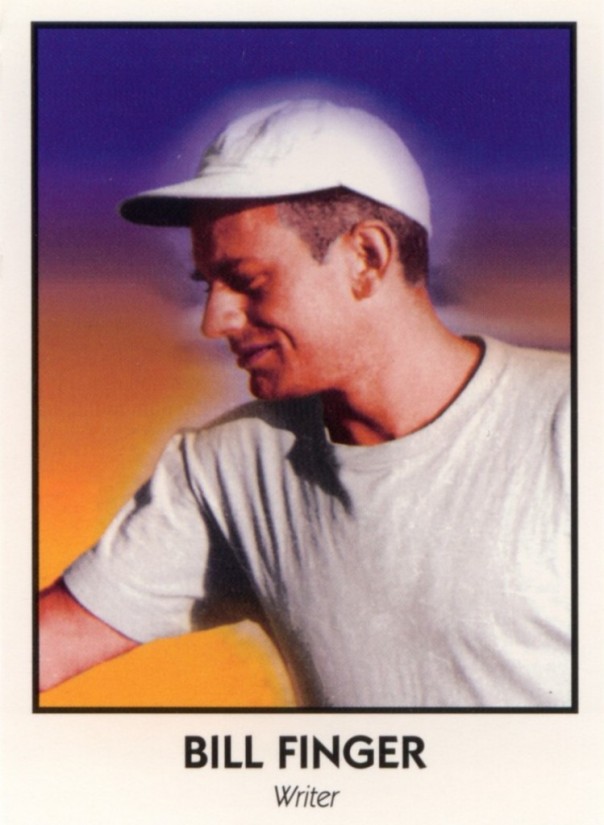 If there is one documentary that I am looking forward more than other in the near future, it is Marc Tyler Nobleman’s Bill Finger documentary The Cape Creator: A Tribute to Bat-Maker Bill Finger.

Unofficially he created around 90% of what we know to be Batman – the cape and cowl, Batcave, majority of the classic villains, the “Dark Knight” nickname, origin story, and a whole heap of other stuff that will be the subject of a more in depth post here soon enough where I promise to do my best not to refer to Bob Kane as the ultimate comic book villain, but don’t keep your fingers crossed.

Frankly if you have not read the ‘Secret Origins of the Batman’ article, you are not qualified to call yourself a Batman fan in my opinion.

Dial B for Blog – Secret Origins of the Batman

Alternatively if you want the cliff notes version and a little sensationalism – feel free to read the Cracked.com article that gives you the bare bones:

Anyway, Marc Tyler Nobleman has been raising the “Bill Finger Awareness” flag for quite some time now.

Marc has published a short book on Bill Finger in the form of a picture book that tells a brief Bio of Bill Finger relative to Batman. It sits on my bookshelf next to my Batman 75th Anniversary trades and the Visual History book, next to a stack of Calvin and Hobbes books, and some dangerously piled comics that probably violate several city zoning laws.

Marc also had a successful Kickstarter.com campaign to raise funds for an independent Bill finger documentary that

The Kickstarter campaign for The Cape Creator: A Tribute to Bat-Make Bill Finger aimed for a goal of $12,016 and currently has a total of $17,863 pledged (the campaign is closed).

What this says to me is that there is a significant amount of generous people who really want to see the documentary, and I feel that is awesome news.

I remember hearing about Marc’s determination to make a Bill Finger documentary on Kevin Smith’s Fatman on Batman Podcast. It was one of the best episode’s that I have listened to at least five times as it covers so much.

You can find the Fatman on Batman Podcast episode for download on Itunes and soundcloud and for streaming at smodcast.com and soundcloud.

In Fatman on Batman episode #53 Marc Tyler Nobleman lists every individual aspect of Batman that Bill Finger contributed and what Bob Kane contributed to Batman. That full list of credits will be the subject of a post here soon if you don’t get time to listen to it.

I’ve listened to that Fatman on Batman episode at least five times, as it truly SHOCKING what the facts are in the history and creation of Batman, and what the “official” story is (for legal reasons) and why Bill Finger STILL does not get a byline credit on the comic book character he co-created.

The short version is eventually we will see a Bill Finger documentary, which I am very excited about. I wish I knew when it was coming, I have no idea. I’ve checked Marc’s various websites and sent him a message on Twitter, and while he does not have a date yet, he replied that he will be announcing some Bill Finger related news “soon”. The documentary is still a work in progress, so there is estimated date yet of when we might see it.

Bill Finger died without ever getting his due.

Bob Kane made the following comment in his autobiography, (a biography that is known to have generous exaggerations sprinkled with lies)

I never thought of giving him a by-line and he never asked for one.

Bob Kane’s words are empty and hollow. A backhanded compliment (more of an insult really) that didn’t mean a whole heck of a lot when the person you are talking to has been deceased for over a decade, and when you have an iron clad legal agreement that guran-damn-tees you will credited as the SOLE creator of Batman until the end of time.

While Bill Finger should have been listed as the co-creator of Batman from the start, unfortunately it was the norm back in the days before “creator rights” become a hot button topic to not put credits on comics, or to have ghost writers and artists who would do work for hire but receive no official credit. It was just how things were done back in the day. That doesn’t make it right, but sadly that is how it was. 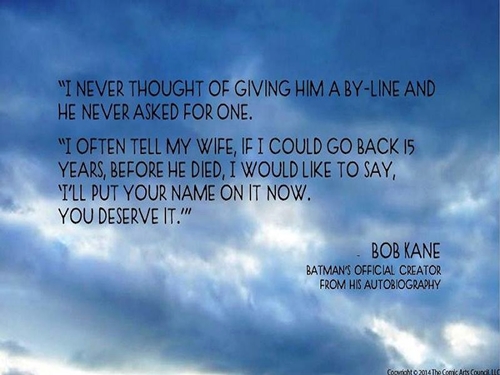 Bob Kane’s gravestone is a thing of beauty, and also has a rather suspect inscription that at first seems innocent and lovely. But after hearing the facts about Bill Finger and Bob Kane, you do wonder about these self-congratulatory words. 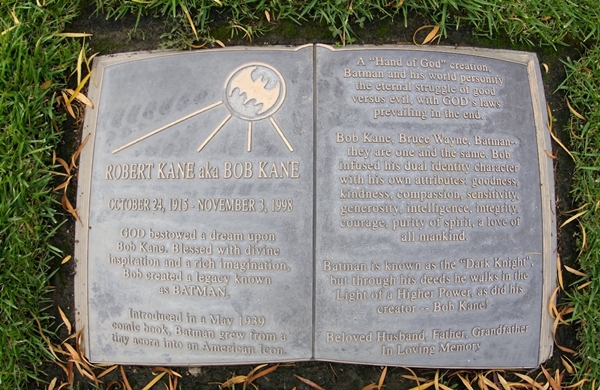 GOD bestowed a dream upon Bob Kane, Blessed with divine inspiration, Bob created a legacy known as BATMAN.
introduced in a May 1939 comic book, Batman grew from a tiny acorn into an American Icon.

A “Hand of God” creation, Batman and his world personify the eternal struggle of good versus evil, with GOD’s laws prevailing in the
end.

Bob Kane, Bruce Wayne, Batman — they are one and the same. Bob infused his dual identity character with his own attributes: goodness,
kindness, compassion, sensitivity, generosity, intelligence, integrity, courage, purity of spirit, a love of all mankind.

Batman is known as the “Dark Knight”, but through his deeds he walks in the Light of a Higher Power, as did his creator — Bob Kane!

Bob Kane’s co-creator was not Bill Finger after all. Turns out the co-creator of Batman was GOD himself!

It seems Bob Kane never let the truth get in the way of a good story.

The irony of his grave stating he was of such good moral character while he lied and took credit for the work of others is the ultimate hypocrisy in my book.

The thing about being a writer is you can write your own autobiography if you want to. You can make it as truthful or exaggerated as you like. But people leave impressions on each other. Bob Kane was not an evil man, but he was a man who lied and did some dodgy things in his lifetime that disadvantaged some other people. He was still the co-creator of Batman any way you look at it, even if the evidence of how much he contributed to the creation is highly dubious.

A few different folks online make no secret of their disapproval of Bob Kane, such as Chris Sims of Comics Alliance:

For those of you out there who may not know why David Uzumeri and I spit out the words “Bob Kane” like we just drank sour milk, the short version is that the guy credited with creating Batman was probably the person who did the least amount of work in that creation, while the people who did the heavy lifting never even got to put their names on the stories they created. It’s not just Bill Finger, of course — Dick Sprang, Jerry Robinson, Sheldon Moldoff, Jerry Siegel and Joe Shuster, all those guys got screwed by Kane one way or the other — but while most of those guys thankfully lived long enough to be recognized for their work, Finger, the co-creator of Batman, died in obscurity without ever getting to claim his creation. Even today, you could read Batman comics for years and never see his name. –  Ask Chris #164: Bob Kane Is Just The Worst

I’m hoping that in Marc Tyler Nobleman’s eventual documentary on Bill Finger that he makes it as clear as he did on Kevin Podcast just how much Bill Finger contributed to Batman. During his comic book career, Bill Finger wrote 1500 comic book stories, a significant number of those stories were Batman stories. 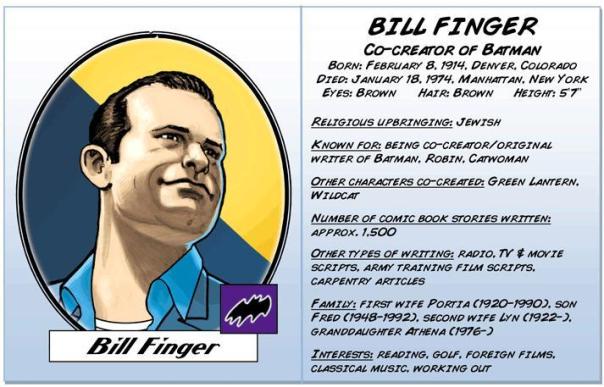 You can find Marc Tyler Nobleman on his blog Noblemania at http://noblemania.blogspot.com.au/ on Twitter at https://twitter.com/MarcTNobleman

Bob Kane got rich off of Batman, and contributed very little to the character. He took the credit, the fame and the cash.

Often for work that Bob did not do himself that he paid others to do for him as sub-contractors.

Bill finger did the lions share of hard work on Batman. He created and co-created characters and stories that he was not credited for, along with other “Ghost” creators that Bob Kane employed. Bill Finger died poor with no grave, no funeral, he didn’t get the cash, he didn’t get the credit or the fame. He also never took credit for the work of others.

Bill Finger’s story is long overdue. I am grateful that eventually will we get to a proper documentary thanks to Marc Tyler Nobleman and of course everybody who contributed to the campaign.

I am grateful Bill Finger was around when the world needed a Batman, otherwise we would have been stuck with this other guy in a red costume and domino mask that Bob Kane created.

Yeah, THAT version of the character would have lasted 75 years for sure, no doubt about it.