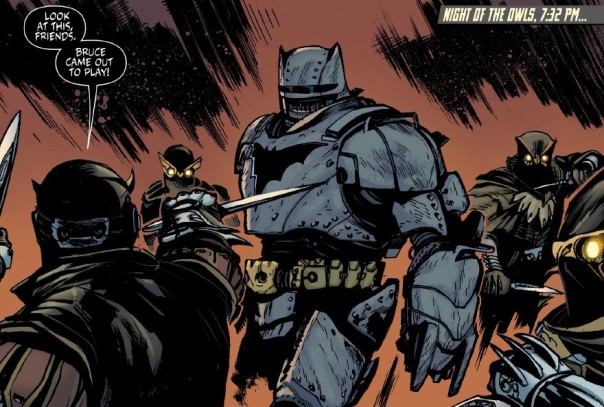 Fed up with the irritating Court of Owls reanimated goons who keep messing up his hair and leaving him bleeding frequently, Bruce turns the tables on the smug owl bastards letting them invade the batcave.  When the Court of Owls lackeys invade the Batcave to finish off Batman, he retreats to a vault like panic room with Alfred to buy time.  He then turns down the temperature of the entire cave to below freezing.

Bruce knows the reanimated corpses can’t be killed, but when the temperature is low enough, they go into a state of suspended animation. The Owls think Bruce trapped and move in for the kill, only to have Bruce emerge in this prototypical Iron Man MK1.0 looking suit, he then proceeds to kick ass and take names, showing once again, that you don’t get to beat batman the second and third time around.  He is no longer surprised by the Court of Owls bag of tricks, he outwits his reanimated foes with science and logic, and he busts a few heads and arms along the way. 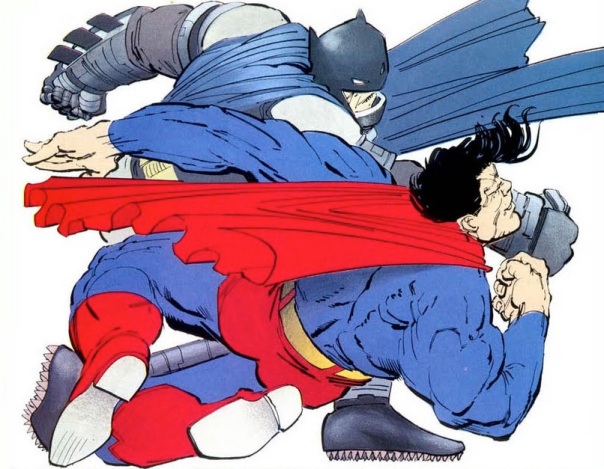 The culmination of the intense psychological build up in Miller’s Dark Knight Returns reaches a zenith point with this knock down drag out battle between two “friends”.  In a world where Superheroes are illegal, a government sponsored Superman has been ordered to take Batman down.  He attempts to do so begrudgingly, warning Bruce not to resist.  Stubborn old man Wayne, channeling the spirit of Clint Eastwood doesn’t give a damn what this government sponsored Super-freak wants.

Bruce wears an armored suit to protect him from Superman, and to stop him from breaking his own hand when punching Superman in the face.  How does Batman manage to temporarily lay the beat down on Superman?  With brains, tactical strategy and of course, because Batman cheats.  He hits Superman with a sonic device to confuse his senses, has Oliver Queen hit Superman with synthetic Kryptonite to weaken the big red cheese, and then proceeds to beat the living shit out of him.  Ultimately Batman knows he can not win the fight, all his carefully planned efforts are just a stalling tactic to disguise his real plans.

After decades of a smiling Batman and loopy science fiction stories, there is something truly visceral about seeing a hard edged cynical realist Batman beating the living hell out of perhaps his only friend.  As demented as it is, it demonstrates his unwavering commitment to his values, which no longer include living the dream of being one half of the The World’s Finest grinning idiots, as we saw the stealthy merciless urban predator of his fist incarnation in Detective #27 temporarily return and ultimately define what Batman would become in the post-modern era of superhero comics. 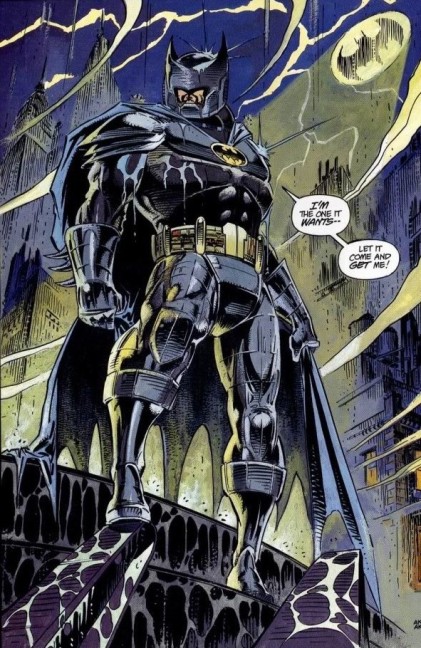 SUIT ABILITIES: Customised armor with kevlar reinforcement to prevent the Predator from slicing Batman to ribbons (again). Shields vital organs and joints, like a classical suit of knight armor, but with more dynamic mobility like the minimalist Samurai armor.

When the Predator comes to town and slices up Batman pretty bad, he nearly dies from massive wounds and profuse bleeding.  Then Bruce he goes away to plan and strategise.  He comes back with a kick-ass suit of armor to stand up to the Predator’s physical superiority, allowing him to trade blows with the creature.  He still basically loses.  Then he gets really pissed off, takes off his helmet and in desperation grabs a baseball bat and smashes the Predator’s face and skull into fresh sushi.  It takes four books to get to it, and a bunch of other stuff happens, but that is my favourite part by far.

The Predator gives up after a gruelling battle and commits ritual suicide (by sword, and not mini-nuke this time).  Another Predator ship turns up, Batman thinks he is truly screwed, but it turns out the Predator was a young gun, over-zealous to go on the hunt.  The other Predators take his body and bugger off to wherever they came from until Super Sales Team-Force needed a sequel, well two more sequels, neither particularly good. 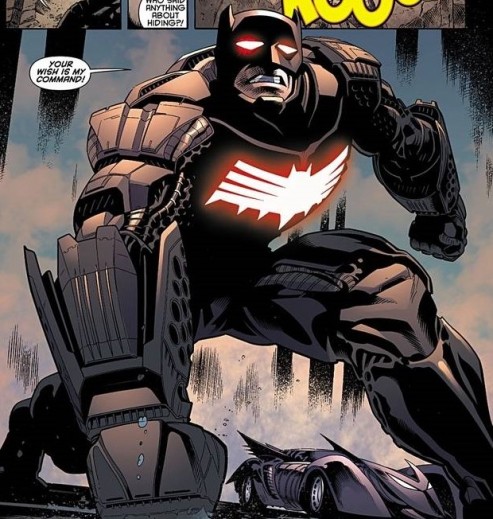 STORYLINE: This is one of several armor suit variant from Batman’s post-52 era.

This suit bears an odd looking Bat-emblem that glows a phosphorescent red, as do the suits eye hole overlays.  Looking something like a mix of Iron Man and a G1 Constructicon from the Transformers the suit provides protection from bullets, knives etc and is more mobile/athletic than some heavy armor variants. 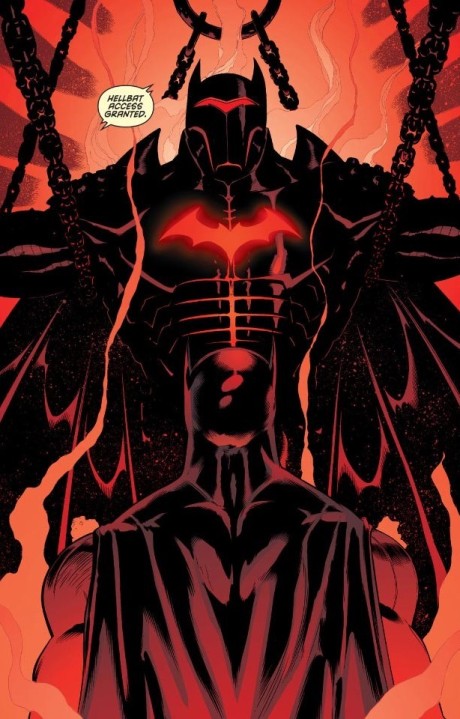 SUIT ABILITIES: A suit put together by the JLA for Batman to allow him to survive against powerful off-world type super-villains, forged in the heart of the sun by Superman.

Batman running around with the JLA month to month doesn’t make a heck of a lot of sense.  How does he not get smooshed into BAT-PASTE by any super villain with super-strength in any given week?  It depends on who is writing the title really.  Here, this issue is addressed by the combined efforts of the JLA, who make him basically a demonic looking suit of armor.  Superman forged the suit in the heart of the sun, so that means it MUST be bad-ass.  Whatever the reasoning, it’s all an excuse for the artist to draw a really cool suit with scary glowing red bits and jet-black demonic looking wings

If you took the Destroyer armor from THOR, mixed it with the fallen angel Lucifer by way of a classical knight’s suit of armor then filtered that into a Batman blender and stitched it all together into some marvelous Frankensteinian beast of a thing, you get the Hell Armor/Hell Suit.  The pseudo religious and mythical overtones are obvious, and the glowing eyes and chest insignia scream “don’t mess with me” in an obnoxious – but ultimately cool – manner, placing it an No.1 on this list of exo-suits.

With the TOP 5 Coolest BATMAN EXO-SUITS out of the way, let’s take a look at some honorable mentions that didn’t quite cut the mustard. 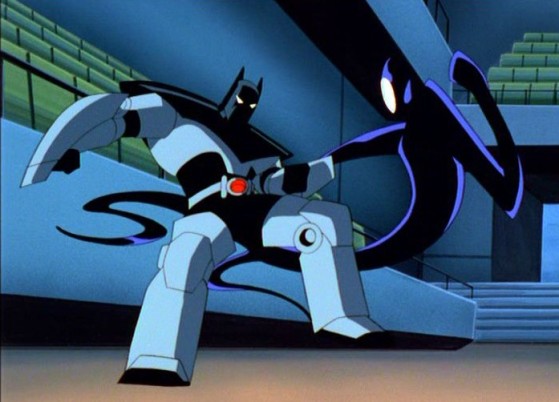 SUIT ABILITIES:  Clunky chunky Bat-armor to keep an aging Bruce Wayne moving that proves to be too stressful on his heart.

This suit is equally parts cool and pretty darn goofy.  It is significant in that it leads square shouldered bodybuilder-Bruce Wayne to design an ultra-sleek, stealthy and stylish glide-suit that the lithe sports playing Terry McGuiness would wear as the leanest most gymnastically inclined version of Batman. 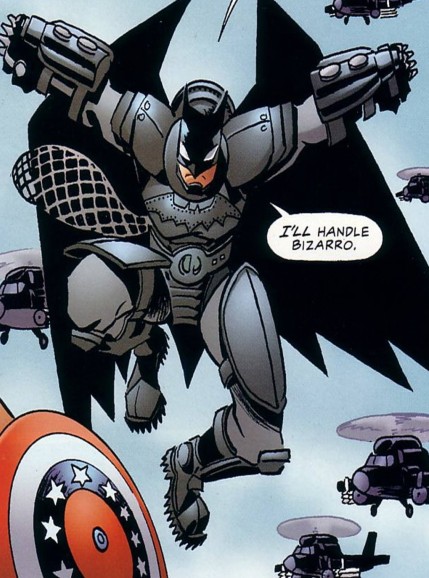 This suit allows a Year One era Matt Wagner Batman to temporarily go toe-to-toe with Bizarro.  Batman shocks and blinds Bizarro, using tactics to keep him at bay, hitting him in the eyes repeatedly with solar lasers, then Superman slices off Bizarro’s hand with his heat vision just before Bizarro was about to punch Batman full force in the face, which would have more than likely killed Batman despite the armor.  Ultimately it is another cool looking “distraction suit” when dealing with Super-powered beings, but it is more than a match for any normal human being in combat. 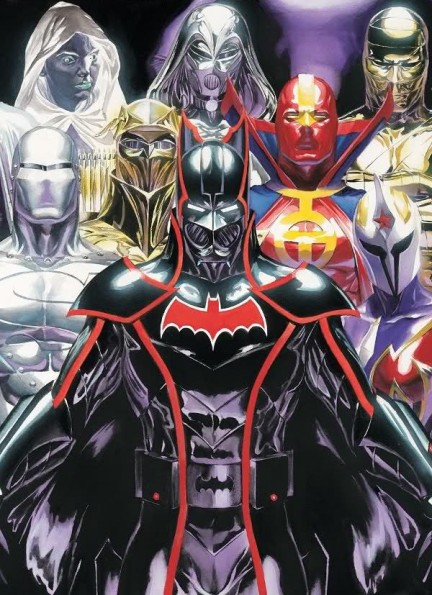 SUIT ABILITIES:  Another armor variant.  A suit designed with the influence of Batman ’66.  The red racing stripe is inspired by the ’66 Batmobile and the utility belt is pure Adam West.

Not much to say about this one, other than it looks really cool, and a cool cover helps sell a comic book. 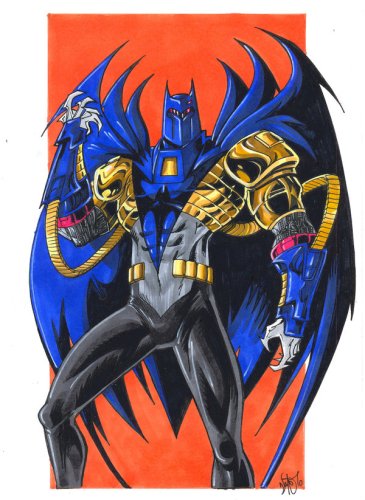 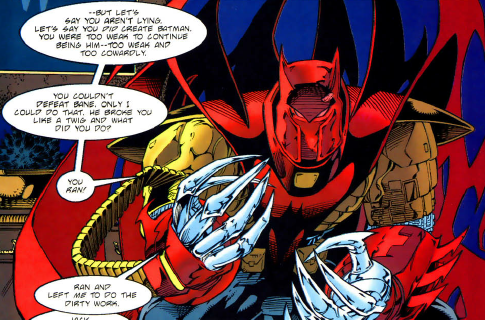 Jean-Paul Valley took over as a semi-permanently armored Batman after Bane broke Bruce’s back, conveniently right around the time Superman died, so the Big Red Cheese could not stop by with sympathy “get well soon” cards or flowers for the ever surly Bruce Wayne.

Jean Paul’s fanatical harder edged mentally unbalanced Batman was the answer to the cynical post Watchmen post Dark Knight era 80s and 90s comics marketplace that grimly insisted on making every character “darker” and more violent, even if that was a completely stupid idea.  In a way, the writers at DC were giving their own commentary on why Batman did NOT need to be any darker or violent or extreme than he already was.

Go too far with a dark Batman and you have the Punisher, not far enough and you have Daredevil.  Jean Paul as Batman was meaner, more deadly, used more technology and weapons as part of the suit, which became more armored and bulky, thus slower moving as he added more customised parts to it.  The Wolverine like claws, or blades on his hands made him more lethal in combat than Bruce, and he fired shurikens via a machine gun belt-like attachment on his over-sized gauntlets.  Some people would say Jean-Paul is Batman turned up to ’11’, but those people clearly don’t understand Batman at all, and DC rubbed thier noses in it with this deeply-flawed from the beginning version of Batman.

Eventually Bruce would return as Batman, but not before Jean-Paul inspired some cool action figures based on his numerous suit variants.  At then end of the storyline, Bruce showed Jean Paul why he was an inferior Batman for relying too much on the suit to do his work for him.  Where Bruce would use exo-suits for specific purposes and missions, Jean-Paul relied exclusively on tech, to his own detriment.  That combined with his fragile psyche and more lethal methods led Batman to reclaim the cape and cowl, for which all Bat-fans are grateful.  Of course most fans knew it was just a gimmick story, and Batman would be back again. 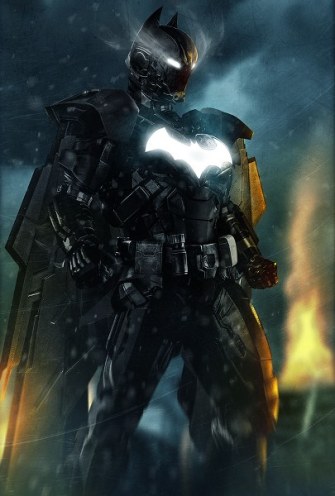 SUIT ABILITIES: All the base level powers of a standard Iron Man suit, extra thermal protection for visiting Superman’s Fortress of Solitude, Internal HUD in visor of helmet, Batman specific customisable extras depending on mission or environment.

IRON BAT by “BOSSLOGIC” is one in a series of concept art pictures showing Marvel, DC and Mortal Kombat characters in Iron Man inspired suits.  If you think this one is cool, check out the rest of his amazing designs at http://thelgx.deviantart.com/art/Iron-Bat-438950390

Sure it has never been used in a story, and you could even rightly call it an amalgam character if you like.  But that “Crisis of Infinite Iron Men” story had you scratching your head for a minute there.

BAT’S ALL folks, I hope you enjoyed reading this blog as much as I enjoyed writing it, these amazing alternate Batsuits are great fun, and I’m sure you have your own favourite that may not be on my list, so please comment and tell me your favouite Batman exo-suit / Armor.

Batman as Demon – 15 Hellish Visions of the DARK KNIGHT 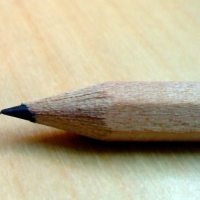 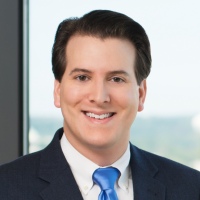 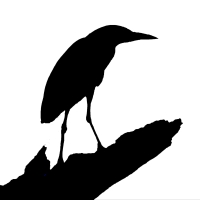 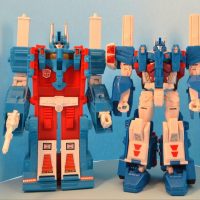 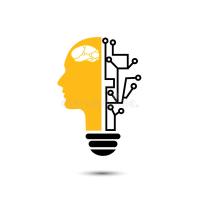