In “Wisdom from the Batcave” by Carey R. Friedman – a collection of spiritual and moral essays on Batman – Carey has this to say in his essay on “The Value of Idealism”

“With a financial empire at his disposal, Bruce Wayne could have chosen to lead an easy, fun life amidst the other Gotham socialites whose values and lifestyle he pretends to share. But if he had, no one would be writing stories about his adventures; and, if anyone did, few of us would read them. Why should we? What would there be to read about? They’d just be stories about soft, pleasure-seeking people like ourselves.

But he chose not to pursue pleasure. He chose to dedicate himself to a higher -infinitely higher- value: to fight for justice and to battle evil. To do that, he had to forego all the comfort, ease, pleasure and fun that billions could have brought him, and with which our society is obsessed. Thank God – for us and for him – that he chose the higher path. There are ideals worth fighting for that are bigger than our own comfort.”

The moral character of Batman is one of the greatest inspirations in my life. We know that no matter what the circumstances, that his moral character is absolute, that he has standards that he applies to himself much higher than the average Joe. He could have lived a life of comfort and ease as Carey states in his essay.

In times of excess luxury it is easy to be soft. We don’t need to hunt for food, we flip a light switch and can see in the dark, and our cars drive us to work.

To be the Batman does mean not turning your back on technology or progress, but on comfort, laziness and selfishness that often comes along with soft living. The Spartan ideals that Batman embraces (rigorous physical training, endless repetition and refinement of his body and his mental abilities) are out of place in the modern world. It takes a truly exceptional individual to dedicate themselves with unwavering passion, devotion and discipline to a cause, project or goal.

Batman’s goal is un-ending. Can he ever “fix” crime, make it go away permanently? No, of course not. It is an impossible goal, which makes his single minded unwavering dedication to this impossible goal even more inspiring.

Many of us get told to aim low in life, and do what is “possible”, realistic or achievable.

But what if, like the Batman, we knowingly devote ourselves to a goal that is impossible, that we will never accomplish no matter how much effort we put in, or what we sacrifice. If we threw ourselves at a task with no hesitation, no fear, no thought of reward of pleasure, only thinking and dreaming and acting on the goal itself, what kind of life would we live?

Would we be greater or lesser beings for living life in this manner?

When people tell us what we “can’t” do (according to them) do we listen and give up on our dreams, do we compromise our values for the convenience of others. Or do we dare to imagine the greatest version of ourselves, embracing impossible goals and charging in their direction with uninterrupted zeal, passion, might and vigor?

Living a life without compromise is one of the inspirations I get from Batman.  To be the best version of me that I can imagine, and I devote myself daily to physical and mental training.

Here’s to Batman – the greatest fictional character ever imagined!

Let the Brotherhood of the Bat (and Sisterhood of the Bat) continue to grow and inspire others in the real world by living lives of value, integrity and devotion to higher ideals. 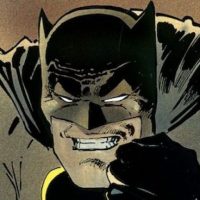